When our lunch at Plein Air was over last Saturday, I brought home all the Sangria fruit plus the cut up fruit that had been served with the crackers and cheese ball. It was a lot of fruit. Cantaloupe and watermelon balls, blueberries, apples, plums, nectarines, pears, and some thinly sliced lemons. I forgot to take a picture of what I had. I just couldn’t stand for all that good fruit to go to waste. #wastenotwantnot

I cooked it up, put it through the food mill and then strained that juice which had a fair amount of pulp in it. I didn’t put it in a jelly bag, but strained it through a colander with fairly small mesh. Some fruit particles came through so the jelly isn’t as clear as It would be if I’d used a jelly bag. I wasn’t going for jelly to enter in the State Fair.

I needed 5 1/2 cups of juice according to the “plum” SureJell recipe. I used that one because it was closest to the amount of juice I had which came from mostly stone fruits. I was a little short so decided to add some Peach Schnapps I had in the cupboard.

I think this was leftover from the year Laura and I rode in the Christmas in St. Michaels parade. It was bitterly cold and we decided we needed a flask. I must have used this for something else since there was only about a quarter cup left. But this stuff never goes bad, right?

I got all my canning supplies ready and put pint jars through the dishwasher. 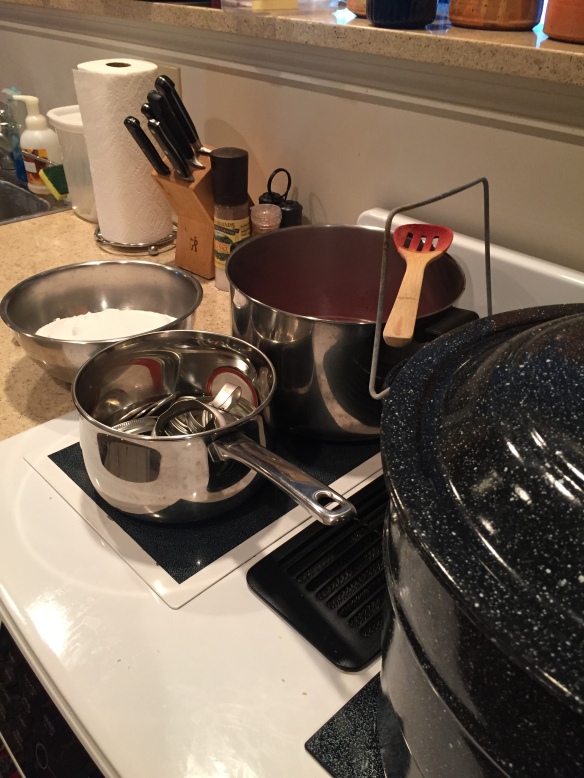 I followed the recipe exactly as I wanted the best chance to have the jelly jell.

Eight pints went into the canning kettle for a 10 minute boiling water bath.

Several of the ladies from the Plein Air lunch will get a jar. It’s a beautiful claret color and is fruity with a hint of lemon. And it jelled…unlike my strawberry jam in June. Yum!

Easton, MD has a Plein Air painting event that is considered one of the best in the country. People paint around the area for a week and significant prizes are awarded. On the Saturday of Plein Air week, activities center on Harrison Street. This painter was smart to put down a piece of cardboard to keep his feet off the hot asphalt. 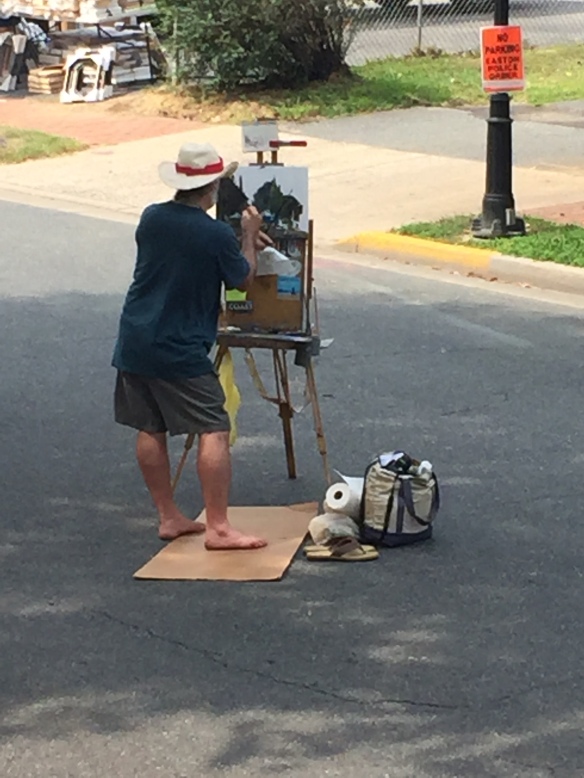 About six years ago Laura had the idea to get a small group of women together to have lunch at one of the restaurants on Harrison Street and people watch. The first years we had lunch on the porch of Masons. Two years ago the restaurant closed so the following year we had lunch on the porch of The Bartlett Pear. People on the street wondered who we were to have such a great viewing location. Some asked if we were judges. We just nodded.

Bartlett Pear is now on the market and its restaurant is closed. Laura, being the master negotiator, rented the porch for us and we collaborated what each of us would bring for lunch. We started with cheese, crackers and fruit. Betty Ann brought two large pitchers of white Sangria. That was followed by a chilled carrot soup. Then a tomato filled with chicken salad. A mini-croissant completed the main course. Dessert was cookies I’d bought at the St. Michaels Farmers Market that morning and cut into quarters.

We had extra sangria so we shared it with the band. The left over cookies were given to the Bartlett Pear owner’s daughter to share with her friends. While we were still on the porch, artists would occasionally make their way up the stairs to get out of the sun and have a glass of sangria.

One of the signatures of Plein Air is that it seems to occur during the hottest week of July. This year was no exception. Temps in the high 90’s with Eastern Shore humidity. We had an occasional breeze on the Pear porch, but most of us were wearing as little clothing as possible that women of a certain age can get away with. After lunch we walked the streets for a little while and then took shelter in the air-conditioned Armory and the Art Museum where juried participant’s work was displayed and for sale.

I often think the palettes should be framed and sold.

By mid-afternoon we had sweltered long enough and went home. I took the remaining sangria fruit thinking I would cook it up, strain it and use the juice to make jelly.  I never want to waste anything. The juice is in the fridge and I will make Plein Air jelly tomorrow. There were so many kinds of fruit in the sangria that there won’t be one dominant flavor. I’ll see what kind of liquor I have in the cupboard that I could add to make a palate focal point. Peach schapps? Cassis? Port wine? Cointreau? I’ll let you know how it turns out. If it doesn’t jell, we can eat it over vanilla ice cream.