The 2018-2019 season at Baltimore Center Stage started with a stellar production of Cat on a Hot Tin Roof by Tennessee Williams. I hadn’t see it in years. The show was directed by actress Judith Ivy who has recently added directing to her resume. 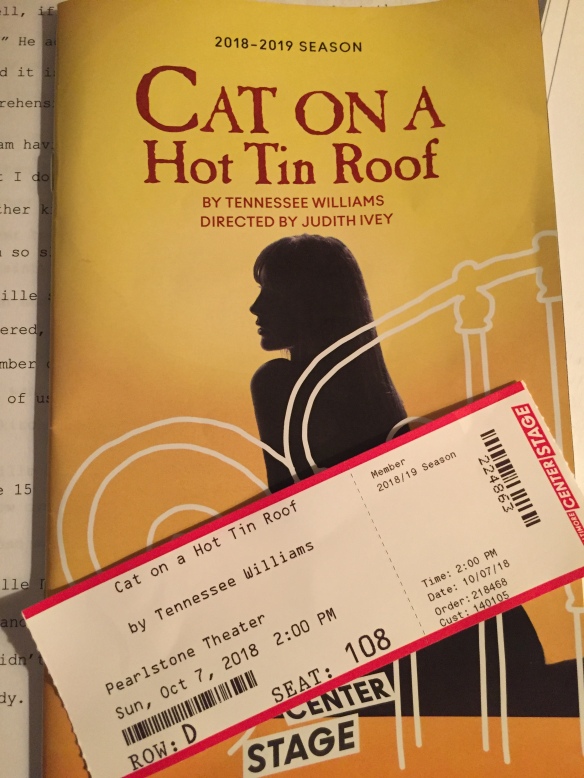 The Pearlstone Theater doesn’t have a traditional stage. There is no curtain so when you enter you and wait for the show to start you get to examine the set. And it never disappoints. This show takes place in the opulent bedroom/sitting room of Big Daddy Pollitt’s home situated on his 28,000 thousand acre plantation. At the back of the stage double doors open to an unseen outside terrace and on stage right there is a door that opens to a small room seen through a scrim. Actors enter stage right, stage left and through the back of the bedroom.

Here’s how the playbill summarizes the play.

In this enduring American classic, family ties and layers of lies collide over the course of one simmering Southern summer night. Themes of morality, greed, and desire play across the stage in this explosive drama about what can happen when illusions begin to unravel. Brick, racked with guilt over his best friend’s death, numbs his pain with drink. Maggie, his wife, is determined to win even fleeting attention from her neglectful husband. But when three generations come together to celebrate a birthday—and discuss a will—all of the players start to crack under the pressure and the heat. How long can tensions build in a house boiling over with uncertainty, secrets, and maybe even love?

Director Judith Ivy commented on what she wanted the audience to experience.
“I certainly want to honor much about the traditional interpretation of this play. But I guess if I were to put my own interpretation within that tradition, I see it as a love story. In some of the productions I’ve seen, the focus has seemed to be on how much these  people hated other, but I think they really love each other. It may be hard or complicated or even unspoken, but I think there’s real love in this play.”