So foggy this morning it was after 9 when I ventured out. And I was glad I did because look what I found — the first hellebore blooms. The evergreen helebore leaves provide texture in my winter garden. The blooms are a bonus.

2. I love this crepe myrtle bark.

3. The silver maples have wonderful craggy bark with lichens and moss at the soil’s edge.

4. Contrasting textures of Hollywood juniper in the background, and rhododendron to the right. In the forefront a euonymus (Silver Queen? it looks more white than in the photo) and liriope. You can see the fog still hanging in the air. 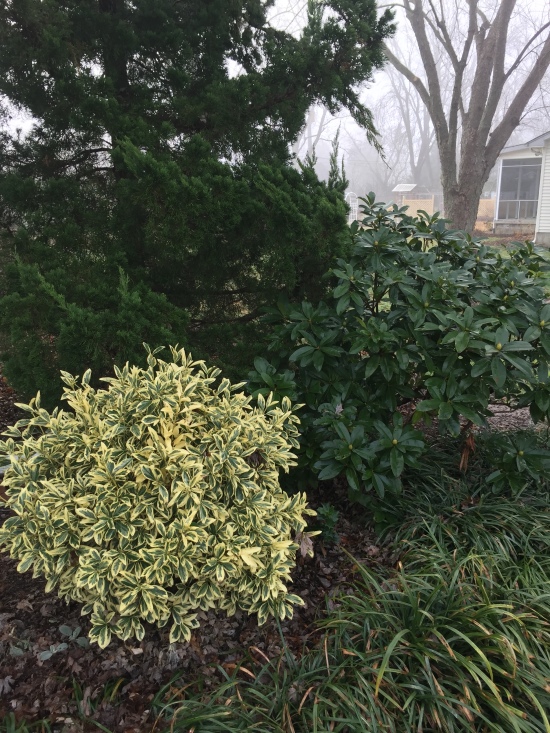 5. A mahonia that I stuck in a back corner of the garden is doing just fine. It provides some texture against the solidago stems which need to be cut back. 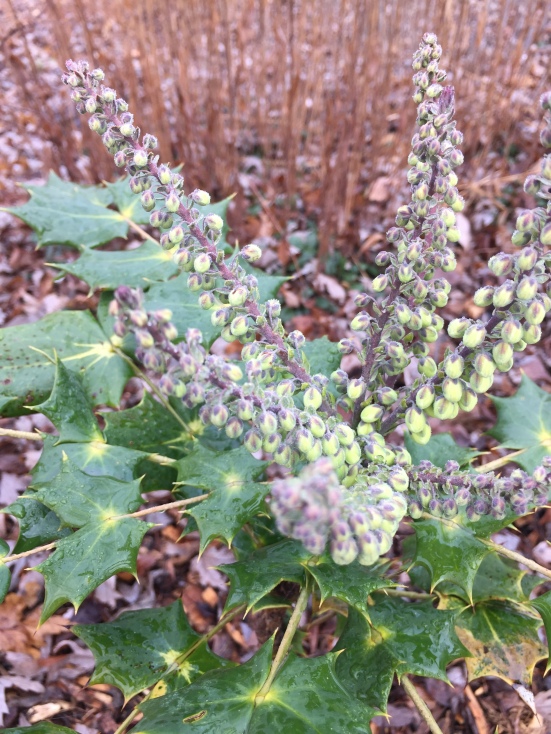 6. And finally..the hope of spring… buds on some daffodils.

That’s my Six on Saturday, this foggy February morning, as I found textures in the winter garden. The meme was started by The Propogator, a UK gardener. This is the link to the rules if you’d like to join in.

It’s just the first week of February but we are having a warm spell and the birds are excited. This cardinal was on my front walk this morning. Nearby a robin was digging for breakfast and a bluejay was calling out. The birds seem to know something is afoot. 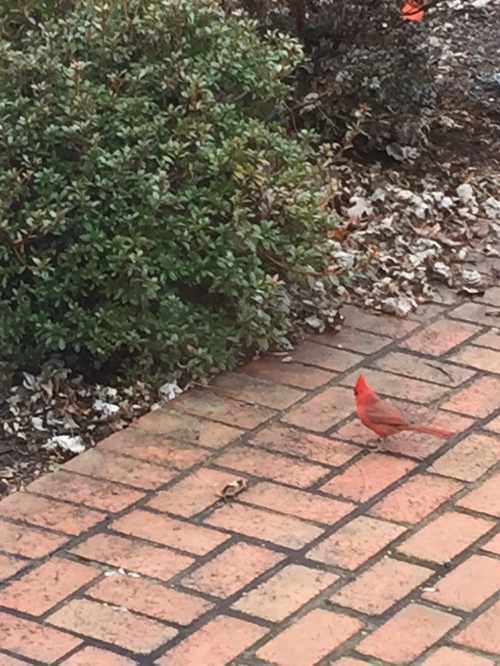 2. I noticed some new growth on the Knockout roses. I think it’s too early to prune, but I’m putting March 1 on my calendar as the date to start this annual chore. The new foliage is spectacular. 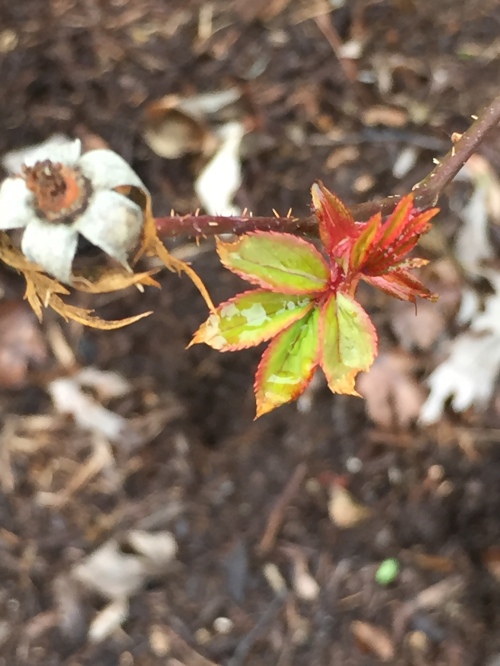 3. I checked the helebores. Not open yet, but lots of buds on this particular plant. Others may be hiding under the leaves, but it’s still very squelchy in the beds and I don’t like to walk in them more than I must as it compacts the soil.

4. When my mother was 75 my brothers and I gave her this teak bench for her birthday. When she moved into a retirement community and couldn’t take it with her, I was gifted with it. Now it is a reminder of a place she sat to rest when she worked in her acre of azaleas in a beech woods. She is always with me in my garden. The lichens on the bench need to be scrubbed when it warms up, but for now they make a lovely patchwork. The squirrels have gnawed on the front leg. Little buggers have no respect for heirlooms!

5.  Daffodils are Goliaths in my garden — resilient and strong. In the upper right corner of the photograph, they are pushing up a large chunk of mulch. Nothing says “Spring is Coming” more than the the daffodils.

6. And just because I can’t believe I didn’t kill an orchid here is another picture of my  phalaenopsis orchid which is continuing to open. To my local friends…if you have an orchid you are going to put in the trash, give me a call. I’d like to try and resurrect it.

And I couldn’t resist adding this photo of the beautiful markings on the throat. They look like an insect from a distance and a Georgia O’Keefe painting close up.

That’s my Six on Saturday, a meme started by The Propogator, a UK gardener. It’s the beginning of February and as spring approaches there will be new things to share. This is the link to the rules if you’d like to join in.