Last week my husband and I spent a couple of days in New York City. He was born in New York. As a young child his parents moved to the nearby suburbs so he visited often and knows his way around the city – unlike me who has no clue about uptown and downtown or in between.

We took the MegaBus. $40 for both of us round trip. That’s the upside. The downside is that we have to drive to White Marsh Mall outside of Baltimore to catch the bus and returning is a wait on the street near the Javits Convention Center. Our choices from the Eastern Shore of Maryland are 1) drive ourselves and pay astronomical parking fees in New York, 2) drive to Wilmington, DE and take the train ($100 – $200), or 3) take the MegaBus. Driving to Wilmington or White Marsh is a horse apiece so we chose MegaBus.

Going up was something of an ordeal. The bus we were supposed to be on was broken down and we had to wait for another bus. Fortunately we had “reserved” seats (an extra $2 per person per trip) and could wait out of the cold and wind in our car. Oh, I forgot to say it was raining. Another bus finally came and we started out – only to get off the highway at a rest stop because the windshield wipers had stopped working and the driver couldn’t see. We had a bathroom and snack break while we waited for another bus. That took another hour. So getting to the city – not so great. It was a good thing we didn’t have matinee tickets for a show. But coming home was terrific. Decent weather and they let us get in the bus while we were waiting to leave. The drive back to White Marsh was uneventful.

Before the trip Laura persuaded me to put Uber on my phone and that’s how we planned to get around the city. I had downloaded the app and my credit card information so no worries about having small bills and how much to tip, etc. You set that up ahead of time.

The MegaBus drops you off midtown – everybody on the bus exits and we got our bags from under the bus. I pulled out my smart phone and touched the Uber icon, feeling extremely proud of myself for using this new technology. Old dogs CAN learn new tricks.

What I didn’t know was that there are three options on Uber and I picked the worst one. It’s kind of a carpool option and it doesn’t pick you up exactly where you are, you have to walk to a location. So we did. Did I say it was raining and blowing so hard it blew my umbrella inside out?

The silver lining was that there was already a young woman in the Uber that picked us up and she explained to me the different categories. I should have picked UberX. That picks you up based on your location, although in NYC’s one way streets that might be on the other side of the road. But all in all, Uber was fantastic. They came fast, were good drivers, and since you’ve already set up your credit card info, no scrambling for bills at the end. You know what the ride will cost before you get in the car.  I’m a fan.

We had a couple of things we wanted to do in the city. We wanted to eat dinner at Il Grifone. We wanted to see a Broadway show. I wanted to go to Chelsea Market and the fabric store, Mood, which is featured on Project Runway. I needed some make-up refills so a stop at a department store was on the schedule. Other than that, we just wanted to poke around.

The city was beautiful as we walked to dinner.

Grifone is a small Italian restaurant with white tablecloths and exceptional food. 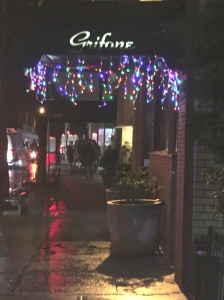 When I sent Laura this picture of my grilled octopus appetizer, she texted back it was the most pornographic food she’d ever seen. I’m still trying to figure that out.

I’d never eaten octopus before, and it was delicious. Meaty and mild with a lobster-like texture. A fresh salad with some grilled shrimp was my dinner.

When we strolled back to the hotel the rain had stopped and good weather was predicted for the next day.

My husband wanted to check out Tiffany’s first floor. We weren’t shopping for anything but it’s always fun to see all the glitz. Bergdorf Goodman was nearby and I thought that was as good a place as any to get my make-up refills. I went in and asked the first clerk I saw. He put me on a stool and before I knew it I was convinced I needed a new brand of foundation. Soon, Clif and I were on a first name basis. One thing led to another and I left with a bag full of goodies. That is me post Clif’s attentions.

Then we ubered down to Chelsea Market where I knew I’d be able to find the elusive harissa. Nope!  It was still elusive, but I did find a container of 25 whole nutmegs for under four dollars. I won’t use that many in this lifetime so I’ve shared with some friends.

Then on to Mood where my husband found a seat (holding my bag from Bergdorf) and I walked around and patted fabric. He patted Swatch, the resident dog. I bought a Mood tote bag.

I used to sew a lot and I love watching the designers on Project Runway. They always go to Mood for their materials.  There is now a new show called Project Runway Junior and these kids are truly amazing. Some are as young as twelve, none more than eighteen. Often they’ve taught themselves to sew watching YouTube videos – or they were lucky enough to have a seamstress mother or grandmother. I always sewed from a pattern and here they are patterning their own designs. Amazing talent.

That night we had tickets for “The Book of Mormon.” It was funny, irreverent and touching. No wonder it garnered so many Tony awards. However the seats in the section of the Eugene O’Neill theater where we were sitting had no leg room. My tall husband was miserable. It took his legs two days to unkink.

It was nice to get away for a little while, but I always love coming home.

One of the things Laura and I loved about watching The Santa Diaries play unfold was seeing the talented kids who were part of the show. One of them was Hannah Zerai who blew us away when she auditioned. Only fourteen, Hannah had an incredible voice. Two days ago, when I opened our local paper, there was a photo and article about Hannah.

Hannah had auditioned with more than 6000 students from the United States, Canada and other countries for the American High School Honors Performance Series at Carnegie Hall. She was on of 265 students selected to perform in the choir at Carnegie Hall in New York. Wow!

Two years ago Hannah began taking voice lessons with mezzo-soprano Suzanne Chadwick at Easton’s Academy of Art Museum. Chadwick said that Hannah came to her with a “small, soft voice, having never sung before.”  Hannah said she wanted to take voice lessons after being a part of the Avalon Theatre’s Summer Fame Theatre Camp at age eleven.

The newspaper article went on to mention that Hannah had sung in our play,The Santa Diaries, when a special part was written to include her voice. Nice to get that recognition for Hannah and for our play which raised over $31K for the Avalon Foundation. Those funds go to support many Avalon Theatre projects including the kid’s summer theater camps.

We are so proud of what The Santa Diaries did to support the arts in our local community and we are proud that Hannah Zerai was part of that team effort. This summer Hannah has been accepted to the Peabody Institute’s Classical Singers Workshop and Summer Vocal Academy. We’ll all be watching you, Hannah, wherever your talents take you.