2. When I got back to the house a few minutes later, I fastened on my toolbelt and began working. I don’t know where I acquired this small toolbelt but I couldn’t garden without it. There is a place that perfectly holds a pair of Fiskars scissors. The orange handles mean I don’t often lose them. They are inexpensive and the tool I use as much as my Felco pruners. This time of year I carry a roll of plastic tape with me as there always seems to be something that needs tying up. And I always have to have something for a drippy nose. 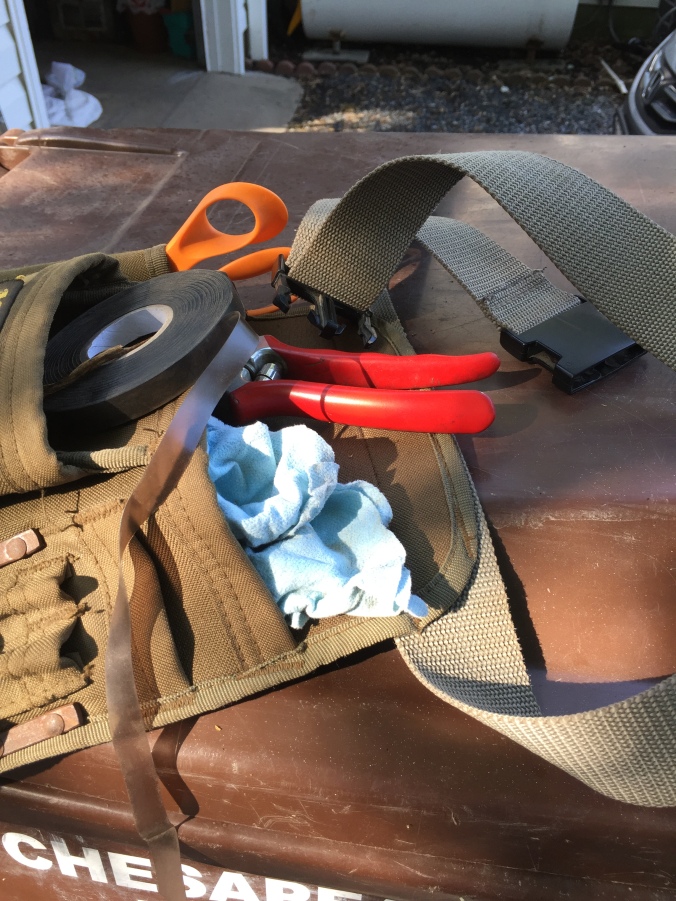 3. The dusty miller is blooming. I don’t remember seeing it bloom before. This variety wintered over in a pot where a slip of coreopsis was tucked in this spring. It keeps blooming as long as I deadhead it.  The  whorls on the upper left are the remainders of clematis blooms.

4. Rudbeckia is beginning to bloom and will be gorgeous in another week or so. They droop in these dry conditions but perk up after watering. They are a reliable perennial in my garden withstanding flooding and drought and clay soil.

5. The veggie beds are not producing well with the heat and dry conditions, but I am harvesting cucumbers. The bumble bees are busy on the cucumber blossoms. The *&%$ squirrels ate the two gorgeous Shah tomatoes I had a photo of last week. I was not happy!  My bed of tomatoes at the community garden is beginning to produce. I’ll be canning tomato sauce in a couple of weeks

6. Quite a few of the Hens and Chicks (Sempervivum succulents) are sending up blooming stalks. The rosette at the bottom of the stalk will die so there will be some maintenance required on these hypertufa planters I made last fall. I have tried some of the other colors of sempervivums, but the green ones reliably winter over and spread for me. 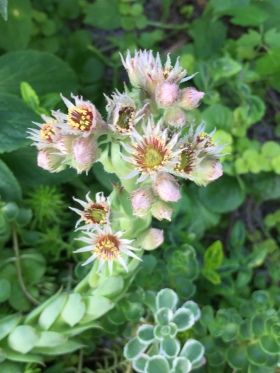 I hope you enjoy my Six on Saturday for this week. The meme was started by The Propogator, a UK gardener. This is the link to the rules if you’d like to join in.

We have a cute shed in our back yard. It was here when we bought the house. The husband built window boxes for it and in the summer they are full of ivy and geraniums although it’s a little forlorn in the fall and winter. 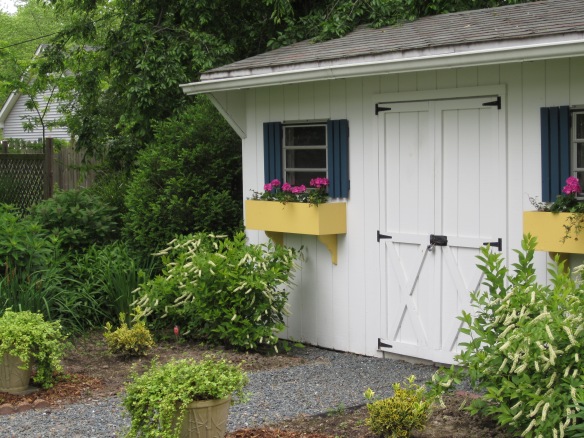 Like most sheds, things get put in it and don’t come out. One of our goals this fall was to see what was in the corners, so we started taking things out some of which were donated to ReStore. We found three boxes of stuff that had been put in the shed when we moved here eleven years ago. I had wondered where those cast iron garden birds had gotten to.

With the shed almost emptied I saw an opportunity. This was the time to install drywall. It would protect the insulation that someone had installed. I didn’t plan to paint the drywall.

You have to understand that I have done a fair amount of drywall in my life. I helped install it in several rooms of our old house and I was the mudder. I still have the tools to prove it. But the last time I did drywall I told myself I was never doing drywall again. However, the passing of years meant I’d forgotten what a pain in the butt it can be. I’d also forgotten about digging drywall dust out of my nose.

My husband handed me the jigsaw you use the cut out the bits where the electric sockets are. I’m sure I would have gotten better with more practice, but after my first cut, I told myself – IT’S JUST A SHED and handed the jigsaw to him.

And since it’s JUST A SHED I’m not going to spackle the seams and screw holes. I did begin to think about paint, however. Not to make it pretty, but to protect the drywall. We have two sheets of drywall to finish the job and they are standing in front of the space in the garage where I store paint. I’ll have to see if I have any partial cans that would do the job. Or I might go to Lowe’s and see what they have on the “oops – that’s not the right color” shelf. I am not paying $30 a gallon for paint for the inside of the shed where the drywall seams haven’t been taped or mudded.

Update: On the Saturday after Thanksgiving I went to Lowe’s but they didn’t have any “oops” paint. I went around the corner to ReStore and got a never-opened gallon of white paint for $7. Two days later all the dry wall is painted (two coats) and now we can install hangers for tools and sort what has to live in the shed. Those unmudded seams and screw holes are a little bothersome to my perfectionist self, but my mantra is…It’s Just a Shed!

I just ordered a new garden shovel. It’s called a Root Slayer. I could have used it yesterday when I planted ten new azaleas. 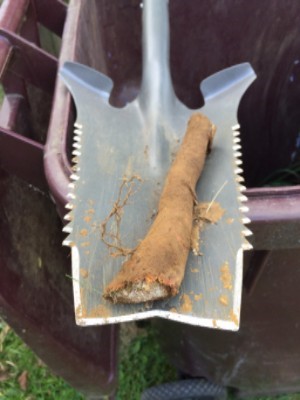 I put the plants in a section of the garden that will now get more light because our neighbors removed a hedge of very tall Leland Cyprus. These azaleas will get dappled sunlight underneath some crepe myrtles, large old silver maples and river birch that I top every year so they don’t get too tall. Despite the fact that I didn’t need very big holes, they were hard to dig and there were lots of roots so I called in the husband.

After trying the first couple of holes with a shovel, my smart husband (who likes to work smarter not harder) got the pick ax out of the shed. I retrieved the big cutters from the garage and we started on hole number three. Those tools made the digging go faster but we could have used that Root Slayer. 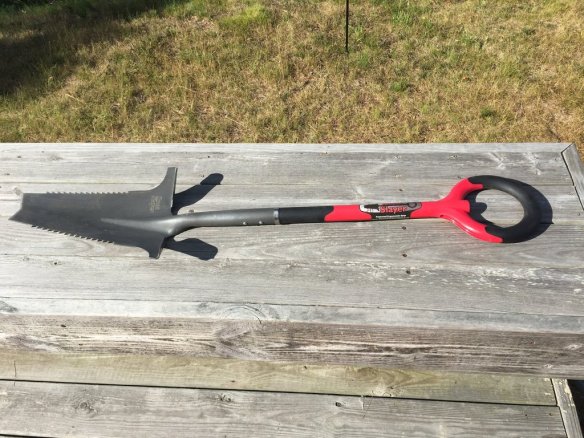 When this tool showed up in an email ad this morning I knew I had to get it. It’s sharp on the bottom with cutting saw edges on the sides and enough of a flange to really get some foot leverage. I have other Radius tools that I like so I’ll let you know my critique on this one once I’ve used it.

I think I’ll go back to Eastern Shore Nurseries and get ten more azaleas – at 10 for $25 it’s a screaming deal. Now, please excuse me while I go change into my Wonder Woman duds.