An establishing shot in a movie or teleplay script tells where the subsequent action takes place. What you see is what you get. The New York City skyline shown at the beginning of Blue Bloods lets the viewer know the action takes place in New York City. Because I watch this show, I also know that when I see a shot of the brick facade of a traditional style home in an upscale neighborhood, the subsequent action is taking place inside Frank Reagan’s home in an unnamed suburb of the city. 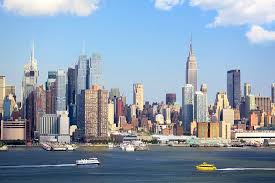 In narrative fiction you tell or show the reader where the action is taking place. If you don’t the reader gets confused and readers don’t like that. If they get confused too many times they’ll give you a bad review on Amazon.

In the revisions of my novel this is coming up over and over again. Apparently when I wrote the novel draft I was in screen play mode. I knew where the action was taking place — in my head. But sometimes I forgot to tell the reader.

In a screen play or teleplay you write in the words Establishing Shot: New York City and you’re all set. The viewer will get visual cues.

In narrative fiction you establish the setting with words. The visual cues are in the authors mind and must be put into words. This also provides an opportunity to expand information about your characters. Here’s an example:

“Martie wrestled a bag of groceries from the back seat of her vintage Candy Apple red Beetle–an expensive custom paint job she had come to regret. As she headed for the suburban home’s front door she noted the weeds in the flower beds along the brick walkway and realized she needed to call the gardening service in her sister’s address book. She opened the door with the key Julie gave her six months ago. Just three days before her sister disappeared.”

In a screen play the director figures out how to show the information in this paragraph or the writer puts it in dialogue. Phone dialogue between Martie and the detective assigned to her sister’s case could fill in some details. There could be a close-up shot of a calendar with the date of Julie’s disapearance circled in red.

As I revise my novel I have to keep reminding myself that what the reader reads is what the reader gets. It’s my job to make sure they have enough, but not too much. Enough so they can be in the scene, but not so much that it makes the writing ponderous.

If the paragraph above was the beginning of a novel I’d better make sure that a Candy Apple red beetle is important to the story. As I reread what I wrote I immediately began spinning off into another story. Focus your squirrel brain, Mala. Focus! You have a Caribbean novel to finish.