It’s been raining…a lot. The lake is back in the back yard, but I’m not complaining except about the mosquitos. The second 6 cubic yards of mulch was put down before the rain started and there is no longer a blue tarp covered pile in the drive. Our neighbors must be happy. That will change in a few days, however, when I get a load of free chips from our local tree people. Most of that will go in the back of the property once it dries out back there.

Here are my six on Saturday, a meme started by The Propogator, a UK gardener. This is the link to the rules if you’d like to join in.

2.  The garden beds are producing. Tomatoes Amish Paste and Sungold cherry), green beans, carrots (purple and orange), beets, and spring onions. I found a recipe for a puff pastry tomato and cheese tart on-line. I added some ham because I had some in the fridge that needed to be used. It was a little complicated to make despite the fact that I bought frozen puff pastry, but it was delicious. I had a leftover piece for breakfast the next morning. 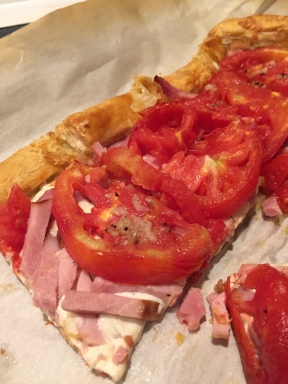 3.  Kinshi Uri or Somen Kabocha squash. Kinshi means golden threads. This is the original Japanese version of spaghetti squash. Burpee picked up this seed and began selling it as Vegetable Spaghetti in 1936. My seeds for Kinshi Uri came from Baker Creek Heirloom Seed Company. I planted some seeds at the end of one of my community garden beds about six weeks ago where I had pulled up lettuces. The squash began sprawling so I put in some upright cages trying to keep them contained until I can pull out the rest of the beets. The plants have been setting fruit but I’ve had problems with borers in the past, so I’m not holding my breath that I will get mature squash. For the moment I’m enjoying the healthy plants with lots of female flowers. That great looking mulch between the raised beds is wood chips from our local tree company, Bartlett Tree Services. The fine mesh around the bed keeps the rabbits out and is tall enough to keep the deer from browsing.

4. The verbena in two big pots had stopped blooming. I gave them a serious haircut and within a week had new blooms. I need to pay more attention to deadheading. The variagated liriope was dug from another spot in the garden. Soon there will be purple flower stalks which will look lovely with the lavendar and pink cleome and play off the bright cherry red verbena flowers.

5. This mum is a favorite. It makes a compact plant that doesn’t need to be cut back and has come back every spring for probably eight years. It will soon be covered with bright yellow flowers but I don’t know why it is starting to bloom at the beginning of August. Isn’t this too early? I wish I knew where I had gotten this variety so I could buy more. I’ve taken pieces from the edge of this plant and put them in the ground, but they have not survived. I’ll try again by putting the starts in small pots so I have better control over watering.

6. I am giving up on hollyhocks. I don’t buy alot of things for the garden but I bought these from a catalog last fall.  I think they were called something like Farmhouse Medley. How could I resist.

They looked fine this spring until the rust took them. I guess it’s just too humid in the Mid-Atlantic. Then the rabbits did in the rest, chomping off remaining green leaves. I remember Hollyhocks as a child in Indiana and thought they would look great against the lattice which would also provide support. Too bad.

This was not my first attempt at hollyhocks, but it will probably be my last. (Notice the equivocation from my beginning sentence.) Of course  I say that about squash every year and I keep buying new varieties to try. Which brings to mind the saying about the triumph of hope over experience…  Either I am a slow learner, or a fast forgetter… or perhaps an eternally optimistic person. I think I’ll stick with the latter.

I hope you have enjoyed the photos of some successes and one total (but not totally unexpected) failure in my garden.  Until next week.