It was a trip to Key West that made me begin to wonder about what is considered writing. I was taking my daily early morning walk from one end of Duval to the other, skirting the guys out power washing the sidewalks from the drunken excesses of the night before.

At least that’s what I thought they must be doing. My husband and I don’t do Duval after 8pm so maybe Key West shop owners just like really clean sidewalks in front of their stores.

It was the t-shirt shops that caught my attention. There are words on most of those t-shirts and somebody has to write them.  I tried to imagine when I would wear a shirt that proclaimed “Don’t Be a Pussy, Eat One.” 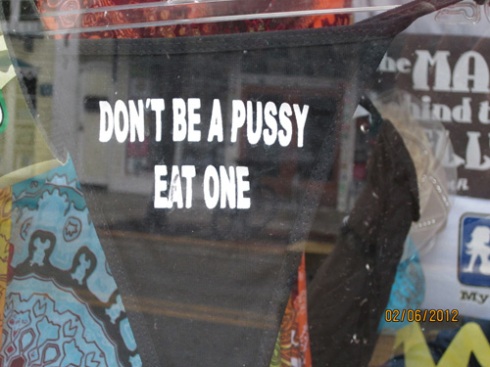 Okay, maybe that’s a gender specific t-shirt (or maybe not), but you get the picture. And that was tame compared to some. You’d have to be pretty drunk to buy these shirts and even drunker to wear them in public. My question is “are t-shirt slogans writing?”

That made me think of greeting cards. Okay. Maybe not literary, but it is writing, right? Romance novels? You betcha! My first novel was paranormal suspense. Definitely not literary, but I’ll stick up for Romance Writers. Writing doesn’t have to be literary. Blogs. Sure, blogs are writing. But, what about texts with abbreviated words? Twitter?

I rarely read literary ficiton any more – still getting over being an English major in college, although I am recently dipping into poetry. I read almost solely for pleasure and relaxation so thinking too hard when reading doesn’t work for me any more. That said, being reduced to reading  t-shirt slogans on my Kindle would be a special kind of Hell. However, reading autocorrect fails is hilarious.

I suppose it all comes down to words and intention. One word, written with intention is writing. Even if it’s on a t-shirt.