1. I took this photo in the parking lot of the Harris Teeter grocery store where I was shopping for the weekend. It was really windy, but a woman from my yoga class pulled up and held the branch for me. Her gloves, which matched the unfurled buds, were a serendipitous addition to the photo.

2. In the back of our property are Asian bush honeysuckle shrubs. As you can see they grow quite tall. These have been here for a very long time. They are considered invasive but they leaf out in the summer and provide privacy for our yard from the houses behind. We cut them back eight years ago and it was time to do it again. This time I hired someone to cut and haul the debris. The hedge will look a skimpy this summer, but will be feet taller by August. The yard was still soggy from all the rain, but the guy who helps me in the garden had some time today. As I was helping him I realized it was a good thing we were doing this now before everything leafs out and would be damaged by pulling branches through the beds.

It was a huge job. Below is the after. We trimmed all the bushes along the back of the property line. Three truckloads of debris were hauled away. I am glad to have this job done. It’s been on my list for the last couple of years.

3. My Jackmani clematis is beginning to leaf out. My father planted the original plant at our new build house in Bethesda, Maryland. When I married in 1963 I took a piece with me. This is the third house where it has thrived.  The purple flowers are reliable and always remind me of my dad. I need to cut it back soon.

4. Last fall I succumbed to an ad that appeared on my computer. These are hollyhocks, a special pale yellow variety. After I planted them I put wire around them as the rabbits seem to like hollyhocks. I will be interested to see if these get the disfiguring leaf rust that hollyhocks I planted several years ago got. I pulled those out. The lattice in the photo pulled away from the frame last night and was on the ground when I went out this morning. A job for the husband tomorrow. 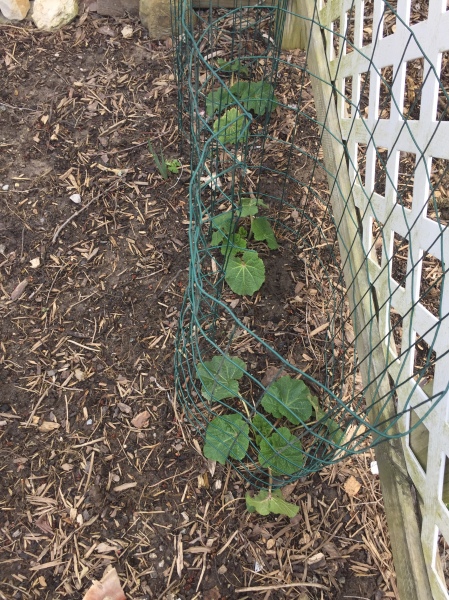 5. We have rabbits. I think they live and reproduce under our shed. They eat alot of things to the ground. We also have a bb gun but I am a very bad shot and because we live in a neighborhood I have to be very, very careful. Occasionally we also have deer and they love tulip blooms. In an effort to have tulips and all those alliums that I planted flower, I am now spraying with Deer Away. It says it works for rabbits and squirrels. However, it has not deterred the squirrels from digging in the pots where I planted tulips last year. I had ordered 100 bulbs in a moment of gardener lunacy and then had to find places to plant them.

The bottle says it works for 90 days, but the small print says it has to be reapplied after it rains.

6. Last fall I dug up a shoot of a camellia that was growing at the Woman’s Club I belong to. Since I and another woman care for the grounds, I didn’t ask permission. I potted the root and set it outside near the house for the winter. The leaves eventually fell off and the bark on the main stem peeled away. I figured it was toast. When I looked at it last week there were two leaf buds on a separate shoot. I am hopeful.

Hope is a gardener’s best friend.