The new furnace has a thermostat that shows the outside temperature. 59 the other morning – that required a sweater. I love fall weather. Crisp mornings and evenings and mid 70’s during the day. Flowers are still blooming including one confused azalea. The flowers are beautiful so I’m going to pin down some low branches to make new plants. I think this plant came from my mother’s azalea garden and I have no idea what the name is. The only one I remember is Martha Hitchcock which has a very similar flower but in shades of purple. 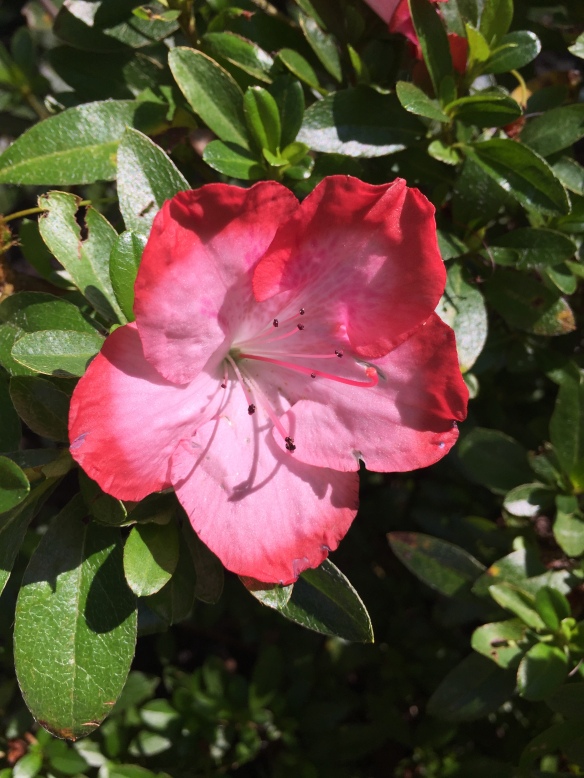 Seeds for fall crops are going in a couple of the raised beds. On Saturday my husband helped me take the tomatoes down in my Community Garden bed and cut them up for the compost bin. Then we added some amendments (LeafGro) and dug the bed. I’ll seed it today. Two kinds of kale, some radishes, turnips and a couple of rows of leftover seeds just to see if they germinate.

My parsnip seeds never germinated. They came from Johnny’s Seeds and that was surprising and disappointing. I paid extra for pelleted seeds as parsnip seed is tiny. But not one parsnip seed germinated when I planted mid-summer. I think I’ll plant a row now  and see if I have better luck. You can do fall parsnips for spring harvests but I might be a bit late.

I had the last “student” at my leaf casting station.

Those concrete leaves will go to yoga class this morning to be delivered. Most of the sand I used for forms has been scattered around. It will eventually help my clay soil. The  I’ve been wanting to do some hypertufa planters and at Lowe’s yesterday found smaller bags of perlite and sphagnum moss so I think I will have to do that before it really gets cold. Then that flat door I’ve been using as a work station can go back into the garage as a colder weather project table.

My first book is at the proofreaders. The second in the series is on the dining room table. I have another plot thread I want to add, and then it will go to the proofer. I am quite impressed so far with her work. She’s asking all the right questions and is only occasionally confounded by some patois slang I use in dialogue.

When work on the second book is completed I will go back to working on book 3. I need to get up and move after working on the books and sitting for hours. These outside projects give me that opportunity. I supposed I could pull out furniture and clean behind, but being outside is always the option I’d rather choose.