I’m blaming this cooking adventure on Jamie Oliver and YouTube. 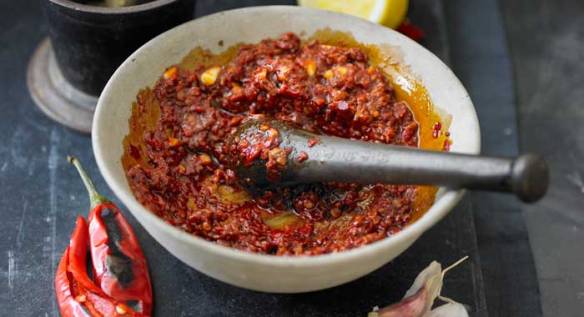 Here’s the backstory. For some reason, I wanted fried calamari. It’s something I order in restaurants, but it didn’t seem like it would be too hard to do, even though I hadn’t deep fried anything for thirty years. Frying – yes. Deep frying in inches of oil – no!

I went online in search of recipes. The difference in most was the spices added to the flour in which you dredge the calamari. Anne Burrell’s recipe had 3 Tbsp of Cayenne. That was going to be way too hot for me. Giada De Laurentiis (my son calls this show “Cooking with Cleavage) added some dried parsley. Another recipe suggested some Old Bay. So my mixture was a compilation of Google suggestions and what I had on my spice shelf. I added some Cayenne, but I don’t like food that makes my sinuses run.

Then I went on YouTube because I wanted to see how you fried the calamari. Jamie Oliver’s video came up, and that’s where the problem started.

His calamari had way bigger tubes than the ones in my frozen package so I fast forwarded through that part until I came to the part where he’s making the dipping sauce.

He mashed a clove of garlic in a mortar. (I used to have one of those, but after not using it for a decade I sent it to the thrift shop. Should have kept it.) Note to self: stop throwing out cooking utensils just because you never use them.)

Then Jamie stirred several big spoonsful of mayo into the garlic and ladled it into a serving dish. Over the top he added a teaspoon of rosewater. Over that a spoonful of harissa. The red-tinted oil was gorgeous on the silky cream colored mayonnaise. Jamie took the tip of a knife and drew the oil out into the mayo. He must have done a turn as a barista at Starbucks. It was gorgeous. That’s what I wanted to serve with  my calamari.

My calamari was thawed, the flour was spiced but I had no harissa or rosewater. So I got in the car and drove fifteen minutes to Easton. I wasn’t thinking I’d find rosewater, but If anybody was going to have harissa it would be Harris Teeter. Four employees later we all gave up the chase. Apparently they used to carry harissa, but didn’t any longer. When they suggested I sort through four shelves of clearance items, I headed home.

I stopped at Graul’s in St. Michaels on the off chance they stocked it. Graul’s carries a lot of odd things, but they didn’t have harissa either.

I made dipping sauce out of mayo and sweet hot chili sauce. It was good, but not as pretty as what I saw on Jamie Oliver’s YouTube video. I roasted green beans and got out the mandolin to make sweet potato slices which I threw in the hot oil. The calamari are fried just before serving as they take only a minute. They were tender and wonderful. I suppose we didn’t really miss the harissa, but I’ll keep looking. Or go on Amazon…

Has anyone else cooked with harissa?

The writing project of the moment is getting rid of pen names and republishing/rebranding some already published titles.

When I published my first novel in 2003, it was with a vanity press. There weren’t a lot of publishing options at that point. I had an agent who sat on the manuscript for a year and then informed me that she only took Christian focused books. She must have changed her focus at some point and forgot to let me know, but it was a year wasted trying to get an agent. Other agents didn’t care that I was previously published by DoubleDay and Brunner/Mazel.

This was at the beginning of the internet so it wasn’t so easy to find out who did what. The vanity press decision was because that seemed the only option to publishing or having the manuscript live in a box in the back of my closet.

At that point in my life I had a private practice as a clinical social worker and since I had scoped out the plot with my psychologist husband, it made sense at the time to publish the novel using a pen name – Annie Rogers – which acknowledged us both. However, we were both clear that the writing was mine alone.

In hindsight it was a mistake. Since I wrote the book, I should have just put my name on it. I suppose it spoke to insecurities which I don’t seem to care about any longer. Then I wondered if clients would see me as a credible therapist if I wrote paranormal romance? That career is behind me, so for a number of years I have thought about republishing my two Caribbean novels under my own name.

When I started working with Laura Ambler we also used a pen name for our e-novel, Big Skye Ranch. Later we also decided we liked another title better, so we are in the process of republishing that book as Last Chance Ranch with our real names as authors. We’ll publish it with CreateSpace as a paperback and as a rebranded ebook.

Now there are multiple options for publishing that didn’t exist twelve years ago. Republishing a book requires a new ISBN number and a new cover. No problem. Talented Laura is designing covers for my Caribbean novels and Last Chance Ranch. And it gives me the chance to tighten up the dialog in my first two novels. I’m a better writer than I was then.

This decision will move forward to finish the third novel in my Caribbean Series. When they’re all published, I’ll start on marketing.

My daughter-in-law had a friend, Samuel, who lost his battle with cancer last year. She shared with me some of his words which have meaning for all of us as we enter 2017.

Samuel wrote, “This is my invitation and my prayer. Keep turning and loving with me. Do not let hardships, disease or disappointments tarnish the treasure of this dance to which we are called together. Keep revolving! In the words of the Holy Qur’an (64:1): “Whatever is in the skies or on earth invokes God.” Mevlâna Jalâluddîn Rumi says, “All loves are a bridge to Divine love. Yet, those who have not had a taste of it do not know! 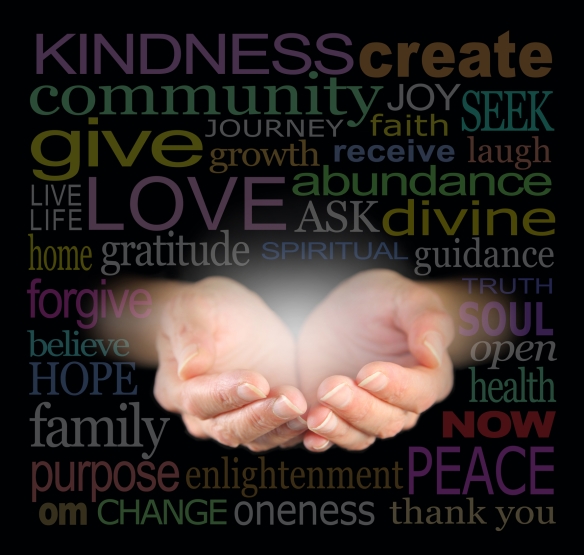 So taste and see the Divine Grace in every turning. Choose with me the charmed life. Bless and be blessed. Give and receive. Touch and be touched. Love and be loved. Give and forgive. Know and be known. See and be seen. Live into life-giving relational practices. Turn and turn again! Above all, do not succumb to fear. Fear seeks to be the killer of the Great Dance. Choose love over fear.”

My wish for the world in these uncertain times is to choose love over fear.

My friend, Diane, from my morning yoga class gives us yogis bags of beans at Christmas so we can make New Year’s Day Bean Soup. She told me she started doing this as gifts her children could give their teachers – apparently much to the kid’s chagrin that first year. But then the teachers and friends and neighbors started asking for the bags of beans. I suspect there is some ratio of the different kinds of beans, but the combination has evolved over the years, Diane told me

Their must be fifteen kinds of beans (including black eyed peas for wealth and happiness) in the Ziploc bag which included a recipe sheet. I didn’t realize how beautiful beans could be until I took this photo. 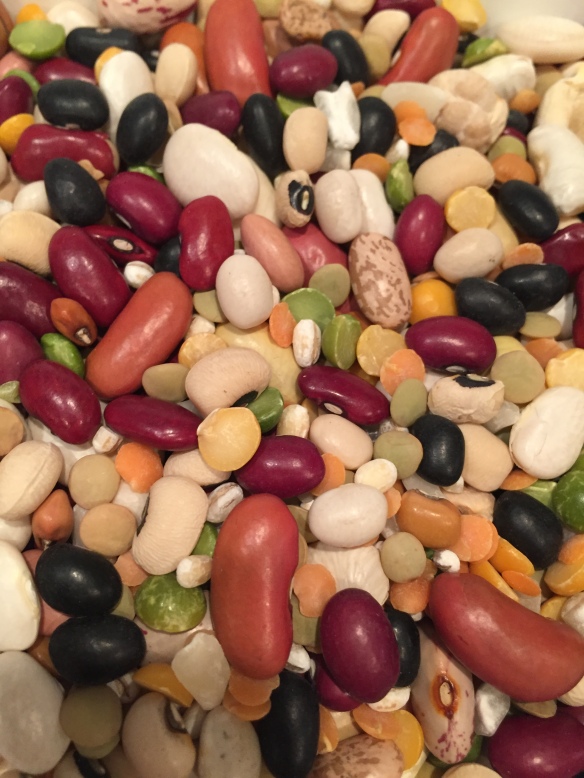 To make soup, soak the beans overnight, then drain the following morning. Add two quarts of water and a ham hock. The recipe says you don’t have to use a ham hock and you would have a tasty vegetarian version. Diane told me they often use kielbasa.

Bring the beans to a boil and simmer slowly for two hours. Then add 1 large chopped onion, a 28 oz can of tomatoes, and celery and carrots if you’ve got them on hand. Season with1 tsp chili powder, lemon juice, salt and pepper and (the directions say) any other spices that spark your fancy (basil, oregano, etc.).  Remove ham hock, cut up ham and return to the soup.  Simmer slowly for one hour or more. This soup is even better the second day.

Even if you didn’t get a bag of beautiful beans this Christmas, check out your grocery store to see what kinds of beans are on the shelf and make a kettle of nourishing winter goodness. This is a soup that begs for improvisation. I found some forgotten pulled pork in my freezer last week and that’s what I’m going to use instead of a ham hock. I’ll used my canned tomato sauce instead of store bought tomatoes. And I have have a bag of carrots from my garden that grew in wonky shapes. Chopped, they’ll be perfect for this recipe. I might even throw in some finely chopped Red Russian kale from my community garden bed. Oh, and  couple of those Hakurei turnips I harvested before the first hard frost. It’s going to be delicious.