Laura and I have started a new project. We are taking the script of #Santa and turning it into a novel — probably Chick Lit if you need a genre classification. And we decided the story arc won’t be focused on Christmas. It’s the wacky characters that will keep the story going.

Anyway, we spent three days last week figuring out what we wanted to do. We took the script, which is essentially dialogue, thought about where scenes needed to be added, and how we wanted to expand characters. A novel gives us so much room to explore inside characters’ brains.

The challenge is to put in the details that novelization requires. In a movie script you give some broad strokes and the director and his staff make the decisions about what a room looks like or the kinds of clothes a character wears. Now we have to make those decisions and write the descriptions. I actually like this process since when I’m writing I’m watching a movie playing in my head. I just have to write down what I see. And both Laura and I have learned that what’s really important is to get something written. You can tweak, rearrange, or delete later, but getting the ideas down on “paper”, even if you think what you’re writing sucks, is what you have to do.

We made enough progress that we will be able to meet for lunch this week and assign scenes we will each write. Our process is that we then pass them back to one another and overwrite. Because our writing styles are quiet similar, this makes for a fairly seamless product. I don’t think readers can tell who wrote what. When the first draft is completed we’ll start moving things around. Sometimes you just have to read the whole thing to see where the problems are.

At noon on the third day we finished what we had set out to do and decided to play. We went to lunch and then explored consignment shops and antique stores. Laura was ready to buy a pair of love seats for her house and asked the price. “They’re sold,” she was told. She thought they were kidding until two big guys walked in and walked the love seats out of the shop. If we’d been there an hour earlier, they might have been hers. 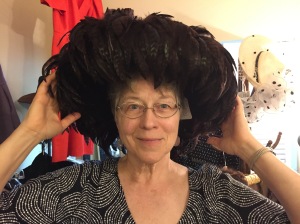 We had fun trying on shoes, hats and clothes. It’s the kind of thing our husbands don’t like to do, but was a perfect guilty pleasure for a couple of gals on a ramble after doing some creative work. Don’t you just love this hat.  I’d love to know its backstory. Who the heck wore this and where? Hmmm…that could be the beginning of another novel.