Would you be able to write if you were sitting outside (maybe under an umbrella to protect you from the scorching sun or a deluge) and had to complete a writing assignment in two hours? And your project would be judged and then put up for sale. This is what artists at Easton’s annual Plein Air Festival Quick Draw do. Oh, I forgot, it’s a juried show and the artists have to submit work in order to even get into the competition. This year the contestants were challenged by downpours. 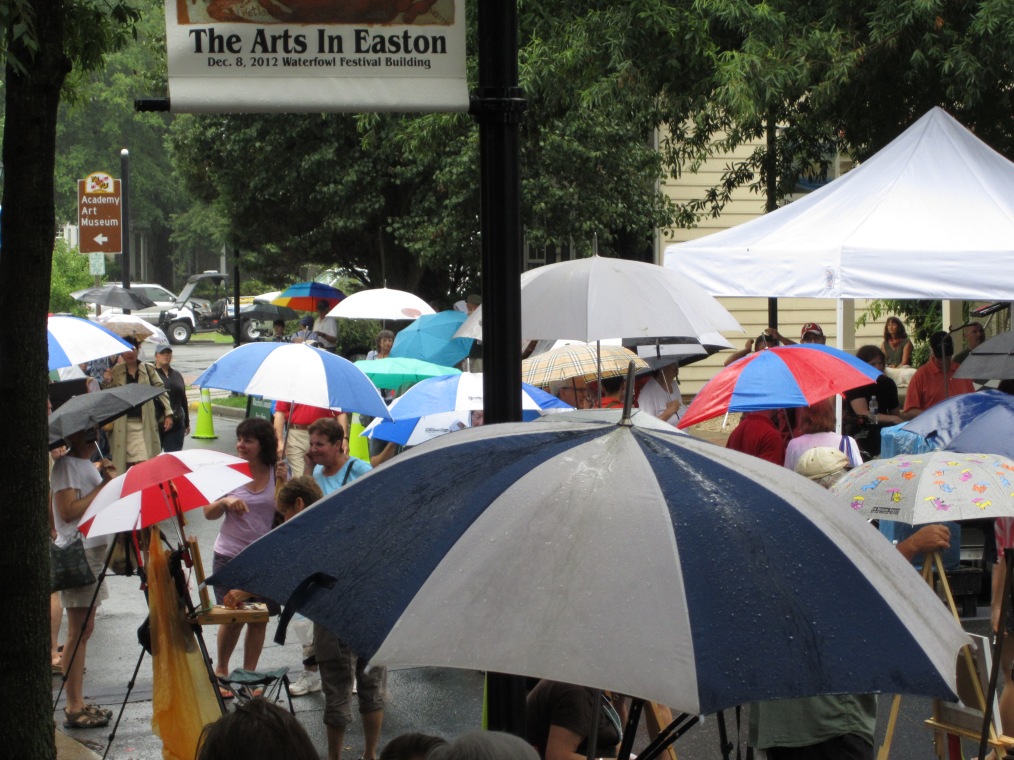 So it made me wonder…what would a Plein Air Quick Write Festival look like?

The very thought of trying to write something with other people watching gives me the hebbie jebbies*. I’m an introvert and I covet alone time. Being closeted with my computer qualifies, and I could never share office space with my husband even though he’s a really nice guy. I know how to do social stuff, but it drains me and I have to have alone time to recharge my batteries. When Laura and I collaborate on a writing project these lines are blurred, but I have to say there is a huge amount of trust that she is not going to be judgemental when I blurt out something that just wouldn’t work. I grant her the occasional eye roll, but that’s it.

Two hours doesn’t give much time for editing or what I like to call marinating. Sometimes something I’ve written stays in a drawer for a long time before I take it out and look at it again. I read it and think, not too bad, or I read it and wonder why I wasted the paper it was printed on. Usually marinating doesn’t take that long, but, for me, it’s a really important part of the process. Two weeks ago Laura and I took out a half hour prime time comedy script that had been in the drawer for a year. Suddenly a new twist on the plot jumped out at us. We did a rewrite and were thrilled with the result.

Writing using prompts might seem similar to a quick write. There are people sitting near you (which I find really distracting), but you only have to share if you want to. However, your words are not all out in the open for the world to see like a painting would be. I don’t like to think that I am a competitive person, but at the few writing prompt workshops I’ve attended the notion that I want mine to be THE BEST always manages to intrude when it’s time to share. Then when I hear what others have written I judge my quick write as unworthy and keep my mouth closed. I am probably the classic neurotic, introverted writer.

A Quick Write Festival doesn’t seem to be in my future, but I’m curious to see if it would appeal to others.

*http://www.phrases.org.uk/meanings/heebie-jeebies.html says the following about these words.

Heebie-jeebies – a feeling of anxiety, apprehension or illness.